At a well-attended Annual Meeting, Reservation HOA members overwhelming defeated a proposal to change the Association’s name, with 96% of members voting to retain the “Reservation” name.

More than 200 residents attended the meeting. Also, a resolution was overwhelmingly approved, with more than 90% of residents voting to recognize “The Reservation” as the official name of the neighborhood, to be used in entryway signs and other neighborhood identifiers. Along with votes tallied at the meeting, residents unable to attend the meeting had expressed support for the “Reservation” name by a margin of 135-to-14. 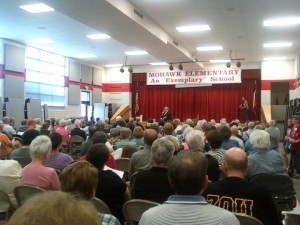 Reservation HOA President Darrell Day pointed out that 90% of American Indians living in our neighborhood had expressed strong support for the name, and also explained that the “Reservation” name is a valuable branding tool, since it’s the only name by which Richardson Realtors know the neighborhood.

In other business at Sunday’s meeting, Tom Courtney received a Lifetime Achievement Award for more than 10 years of work in handling Reservation email communication. Tom Calvert received the 2010 Volunteer of
The Year Award for organizing the Reservation Crime Watch Patrol. The Membership also approved 2011 officers: