October 2012 Yard of the Month 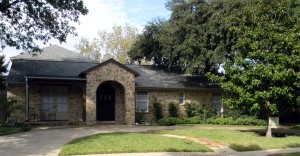 The home of Mike and Ofie Hunt at at 1322 Apache is recognized as the October 2012 Yard of the Month. The Hunts provided the following:

“We have lived here in the Reservation for 3 years. This lovely home was totally remodeled. The remodeling was done by Philip Hunt Development. They took it down to the stud walls, and all new stone was put on the front of the home . Entirely new electrical was installed in the house, walls were moved around and the ceiling was raised. All new baths were added and an 800 sq. ft. second floor was added. The Hunt’s have so much enjoyed living in the Reservation area.”